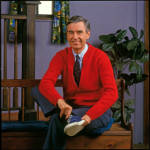 Neighbours, we all have them. Sometimes we get along with them, sometimes we don’t. Our current culture frequently has us living next door to people for years and never even knowing their name.

Most of us have had an example or two of what it means to be a neighbour, one of the most famous is just in the picture. Did you know he was, among so many things, a Presbyterian minister? Well you do now. Fred Rogers gave generations of children, and adults too of course, an idea of what it might mean to be a neighbour. He also began to break down the notion of neighbour as a geographical description.

Jesus also talked about neighbours, one neighbour in particular. When Jesus was asked a question about the identity of “neighbour” in the context of “Love your neighbour as yourself” he told a story. A very famous and well known story, so well known that many people have no idea the “Good Samaritan” comes from the Bible at all. You quite likely know the story of a person set upon by robbers, beaten, left half-dead and naked on the side of the road. A priest, a professionally religious person, and a Levite, a non-professional but very religious person, both cross to the other side of the road to avoid the victim. A Samaritan, a member of a group hated by those listening to Jesus when he told the story, steps in, administers first-aid, arranges for care, and saves the person. Jesus’ questioner correctly identifies the despised Samaritan as the hero, the neighbour, of the story.

I can hear some of you saying, probably not out loud, “We all know that already . . . What’s your point?” My point is two-fold.

First, we need to know we are called to love, and then obviously also help, our neighbour. That’s the easy one.

Second, make sure you know who your neighbour is. Neighbours don’t just live next door. The point I’m trying to make in both sermons is a neighbour is anyone who needs what we have to offer. Not just the people who are geographically proximate to us but also those who are across the world. Social media has done very little good for Western culture but what it has done is allow us to make authentic connection with people who need what we have to offer . . . neighbours.

“Do we know who our neighbour is?” Knox Presbyterian (to download, right click and select “Save Link As . . .”)

“Do we know who our neighbour is?” St. Mark’s Presbyterian (to download, right click and select “Save Link As . . .”)

PS For those following my father-in-law’s journey this is taken from a post written by my brother-in-law, Steve Frost:

Dad passed away peacefully, surrounded by family, Sunday July 7, shortly before 10:00pm. Dad was a pastor for 49 years, Sundays were always a special day in our house. It seems fitting he went to his rest on Sabbath.