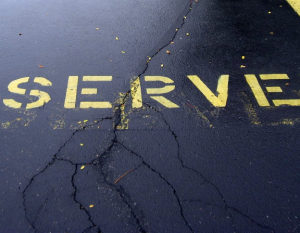 If there is a list of verbs that we don’t care for I suspect that that “serve” will be very high on the list. There is something about the notion of serving that just rubs us the wrong way. We find it very difficult to distinguish between “serve” and “servile”; some might even suggest that you can’t have one without the other. I dispute that and I am not alone. Albert Schweitzer said, “the only ones among you who will be really happy are those who have sought and found how to serve.” Albert Einstein said, “the high destiny of the individual is to serve rather than to rule.” And to prove that people with names other than Albert talked about serving, who can forget, “But you’re gonna have to serve somebody” by Bob Dylan. And last, and by no means least, “For the Son of Man came not to be served but to serve, and to give his life a ransom for many,” Jesus.

Knox Presbyterian “…not to be served but to serve…” Huh?

St. Mark’s Presbyterian “…not to be served but to serve…” Huh?

There is almost nothing as irritating to many of us as having leaders, parents, bosses, whatever, give us the “do what I say, not what I do” line. I don’t want to speak for anyone but me but I HATE that. The complete lack of that is what makes this bit of Mark, and Jesus overall, so cool. There is nothing that he has asked us to do that he hasn’t already done. We can try to hide behind his essential divinity all we like but we are always faced with his essential humanity at the same time. In yet one more apparent paradox of the Incarnation he was simultaneously very special and nothing special.